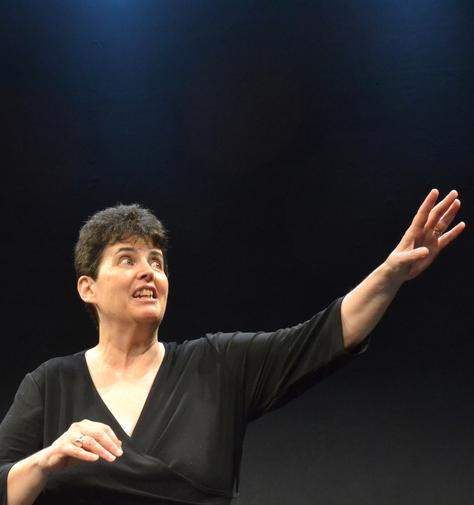 "Not a line, not a word, is wasted in this multi-layered story of dignity, sickness and, above all, truth.… If you’d told me the strongest, most powerful piece of theatre I’d see this fringe would be in the Free Festival, I wouldn’t have believed you.  Extraordinary.”   ★★★★★   -Martin Walker, reviewing MADE FOR EACH OTHER at the 2012 Edinburgh Fringe Festival

Education includes a B.A. from Brown, M. Div. from Yale, M.A. and Ph.D. from the University of Nebraska. Monica was the 2005 Teaching Fellow in the Graduate Playwriting Program at Boston University, where she received an MA in playwriting.

Her musical, “Lighter”, for which she wrote book, music, and lyrics, was presented at the New York Musical Theater Festival in 2009. Her full length play about race, “My Occasion of Sin,” was part of the 2014 season of the Detroit Repertory Theater. Her play for one actor, “Made for Each Other”  has been in various production since 2009. In September of 2014, “Chosen Child”  was given two staged readings in New York as part of the Indie Theater Now/Stage Left Studio Reading Series, directed by Austin Pendleton. “Chosen Child” was also part of the 2014-2015 season at Boston Playwrights’ Theatre, where it was nominated for an IRNE (Independent Reviewers of  New England) award for Best New Play.